Less than two weeks ago, we reported that Moody’s had downgraded its 2017 outlook for the life insurance sector from Stable to Negative. A new Moody’s report published after the Federal Reserve raised its benchmark federal funds target rate by 25 basis points last week indicates that hike will benefit life insurers and “help reverse the downward march in investment portfolio yields.” (1)

The federal funds rate is the interest rate that depository institutions charge each other for an overnight loan. Banks are required to keep a minimum reserve requirement and will move monies back and forth, charging a rate based on the target rate set by the Federal Open Market Committee (FOMC), which is the Federal Reserve’s primary monetary policymaking body. 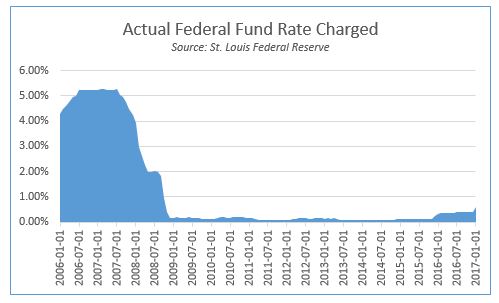 While the rate only pertains to overnight loans among very creditworthy financial institutions, its effect is actually broader since banks use it for the basis of all other short-term rates. It also indirectly affects longer-term rates, such as home mortgages. An article in the Wall Street Journal yesterday declared, “The era of the ultralow mortgage is over.” It also pointed out that after the US election, even before the Fed acted, rates on a 30-year mortgage jumped .76 percentage points, to 4.38%, (2) the “post U.S. election bump in yields” we mentioned in our prior blog.

The increase in long-term rates would be a welcome relief to life insurance carriers who have struggled mightily in this low interest-rate environment. Insurance companies attempt to match their investment time horizon with their liabilities, and life insurance is a long-term liability. The Moody’s report points out that “new money rates on long-duration investments are more important for insurers,” a good benchmark for new money rates of life insurers being the 10-year treasury plus a credit spread, which has seen a “100 basis point rise…from… summer lows.”

Should the long-term rates become sustainable, Moody’s sees the profitability of older annuity blocks improving and believes “interest-sensitive life insurance,” like universal life, would benefit, along with other “long-tailed specialty products” like long-term care, both of which have seen dramatic cost increases in the last few years. With increased rates, the pressures on carrier reserves would lessen, and the chances of GAAP charges and write downs would decrease.

The Moody’s report believes this might be a first step toward a “more normalized policy rate environment that would be conducive to better long-term operating conditions and profitability.” Let’s hope so, but let’s also remember that the current target rate hike, only the second in 8 years, only pushed the rate from .50 to .75 percent. A decade ago, a “normal” fed funds rate was 5.25 percent. We are a long way from that.