Here is a New Twist: Actual Life Insurance Costs That Are Lower Than Illustrated

In the past year, we have posted blogs about things we have rarely, if ever, seen before. Cost of insurance (COI) increases — they didn’t seem possible. Negative interest rates — never heard of them.

Now, we are seeing something that is just as odd….carriers providing inforce current assumption illustrations with projected costs in the illustration that are higher than what they are actually charging.

Our NYC office was reviewing a number of Phoenix policies for one of our institutional clients and found that the actual COI being charged in the policies was lower than what Phoenix was projecting in illustrations we received in 2016. However, when we compared what Phoenix is actually charging to illustrations received in 2012, the numbers lined up. While the actual costs being charged in the policy did not change between 2012 and today, the projected costs shown in the policy did.

The spreadsheet to the right demonstrates what we

found. There is an approximate 4% difference in COI costs between what is shown in the 2012 and 2016 illustrations, though according to Phoenix, there is no difference in the actual COI charged in the policy.

Another one of the carriers projecting higher than actual costs in some in force illustrations is Lincoln Benefit. If you recall, Lincoln Benefit was sold by Allstate to Resolution Life Holdings, Inc., a UK based “run-off” company, for $600 million in 2013.  (See: Another Life Insurance Carrier is Sold…Why This Sale May Be Bad News For You and Your Clients.) In early 2014, a notice went out from the carrier that in “order to remain compliant with state regulations…illustrations for Ultra Plus and Ultra Index will now reflect higher current Cost of Insurance (COI), which will result in lower projected cash values. These changes will not affect our actual cost of insurance.” (Emphasis theirs.)

We reviewed Ultra Plus illustrations received in 2013 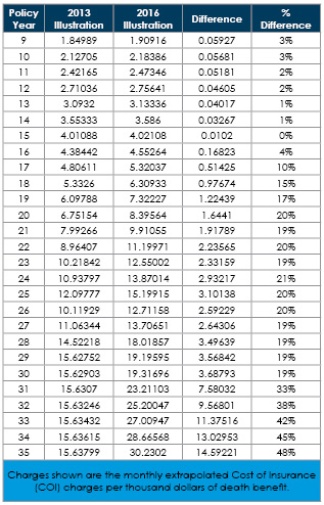 and 2016. As can be seen in the spreadsheet to the right, the projected illustrated costs shown are, in fact, higher in the 2016 illustrations. But we confirmed that the actual COI costs are in line with the 2013 illustrations.  The percentage difference is single digits for the next ten years, but then widens and in the later years increases rather dramatically. So, why is this occurring and what does it mean?  Life insurance policy illustrations must satisfy two tests, one called the self-supporting test and one called the lapse supporting test. Both are laid out in the Life Insurance Illustration Model Regulation, put out by the National Association of Insurance Commissioners (NAIC).

In the self-supporting test, on or after the fifteenth policy anniversary for single life policies or the twentieth policy anniversary for second-to-die policies, the accumulated value of all policy cash flows (premiums, interest, commissions, expenses, etc.) must equal or exceed the total policy owner value (cash surrender values and any other illustrated benefit available). The lapse supported test is a similar calculation, except that test must assume zero policy lapses for policy years six and on.

It appears that the higher illustrated COI will simultaneously increase the policy cash flow amount and lower the total policy owner value in those illustrations, helping the carriers meet both tests.

For those of us managing life insurance, we will just have to make adjustments. The Lincoln Benefit announcement mentioned before said that their projections will typically show a lapse that is one to four years earlier than will actually occur (based on actual current assumptions).

Which begs the question(s):

We at ITM TwentyFirst truly do try to be fair to the carriers and we recognize they have walked into a “perfect bad storm” of negative interest rates and increased regulation and reserve requirements. It is a challenging time for all in the insurance industry, especially for the clients that we serve.

As we move ahead, we will report back with any new information.