Our last blog entry asked the question, Will the Universal Life Price Increases Spread? Shortly thereafter, AXA announced that they were increasing the cost of insurance (COI) on a limited number of Athena Universal Life II policies, effective with the first monthly deduction on or after January 1, 2016.

The COI increase was limited to those policies originally issued to people age 70 and above with a policy face value amount of $1M or more.  The Athena Universal Life II policy does contain a death benefit guarantee, the Lapse Protection Rider (LPR.)  The new COI rates will not increase the premium needed to keep the LPR in force, so long as no loans are taken on the policy, no changes are made to the policy and sufficient premiums have been paid to keep the rider in force. Policies without the rider will need additional premium to keep the policy from lapsing. 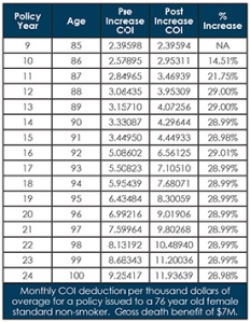 Frank Tomasello, in our NY office, is reviewing the AXA Athena II polices that we manage and has found that those policies issued on insured’s in their 70’s appeared to show an approximate 29% increase in COI rates. The chart to the right shows the cost increase for a policy issued to a 76 year-old female standard non-smoker. While a complete analysis of all ages and underwriting classes was impossible, we did run other scenarios and found very similar outcomes. For example, the COI increase on a preferred non-smoker male issued at age 73 matched the percentage increase shown to the right almost exactly. 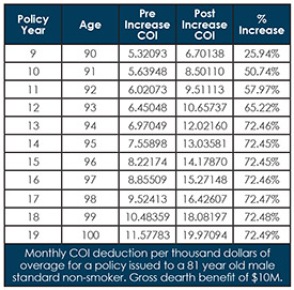 increases, based on our limited survey. The chart on the left shows the COI increase for a policy issued to an 81 year-old male standard non-smoker. As can be seen, the increase climbs to 72 percent, a hefty increase indeed. In fact, if the insured on this policy were to live approximately seven more years, the COI paid on the policy would equal the net amount at risk death benefit. In other words, you would have paid $1,000 for every $1,000 of coverage obtained. And that does not include the costs that were paid in the previous eight years of the policy.

When we compared the post-increase COI in the Athena UL II policy in our first example, with an Athena UL DB on a female nonsmoker at the same issue age, we see that the costs are similar. 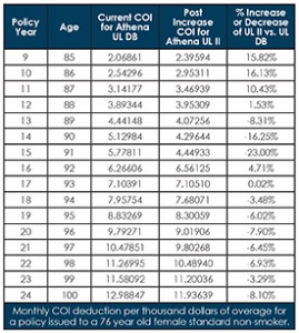 The chart to the left shows the monthly COI for both products. You can see that in the first three years, the post-COI increase Athena UL II is costlier, but it becomes less expensive over time, relative to the UL DB product. If the policies were held to maturity the cumulative cost would be slightly less in the UL II policy. While policy design may play a factor, this would suggest that the UL II product was, when issued, slightly “below market cost” and the cost increase simply brought its cost structure in line. In fact, when we compared the Athena UL II product to other similar products at the same issue age and underwriting, including products from NY Life and Lincoln National, we found that, in general, the Athena UL II product, pre-price increase had, on a cumulative basis, a lower COI than the other policies reviewed, while the post-increase COI was in line with the other policies.

While the COI increase may have just brought the AXA UL II policy in line with other products in the market, including AXA’s own product, this does not bring much comfort to those dealing with the funding of these policies going forward.